History of the Building

The original concept behind this building was to form a Cathedral for the area around Dulwich and Sydenham. At the time, c1880-1890, much of the area was still fields and there were a scattering of villages. The church was built on a promontory which was visible for miles around. The design was based on original ideas by George Fellowes-Prynne in 1887. During 1888 final designs were completed and construction was started. Funding was limited for this project and the construction took place in phases. The final building, as seen before the fire, had a truncated tower, which would have supported a spire, and the nave consisted of 4 arched bays instead of the seven which were intended. Over time Southwark Cathedral became the focus for the surrounding churches and the area around became more built up as West Norwood and Dulwich Village expanded. This meant that All Saint’s had less prominence in the local church hierarchy and that the site became constrained by surrounding roads and properties. Consequently there wasn’t sufficient space to complete the original designs and the result was that the West end of the church had a ‘temporary’ façade which looked out of keeping with the rest of the building.

In 2000 the church, which is in a prominent position in Dulwich, was severely fire damaged following a fan heater being left on overnight and causing a source of ignition. As can be seen from the photograph at its height the fire could be seen throughout much of South London. All that was left was a shell; all the wonderful decoration and carvings were completely destroyed. The intricate stonework which remained was heat damaged and a major restoration exercise was required.

The survey information was required to facilitate the repair and restoration of this spectacular and important South London church. The requirement was to survey the site and remains of the building at all floor levels including Basement, Crypt and the Nave. In conjunction with the plans six sections had to be surveyed throughout the building, these were to look in both directions so in effect there were twelve sectional elevations, along with elevations of the main facades. The site sloped considerably to the extent that the Eastern end was 7m lower than the Western end.

The topographic and elevational surveys were carried out using leica total station theodolites. A fully observed traverse was run around the building and through each floor with the stations being established in locations suitable for both the site survey and the elevation survey. The lasers within the total stations enabled points to be surveyed remotely across all the façades and around the inner walls at high level. From this the information was processed and drawn up in Autocad. Final data was presented in both digital form and plot form. 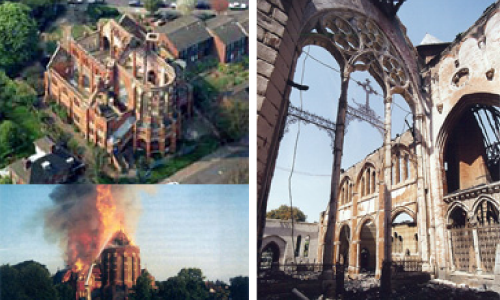 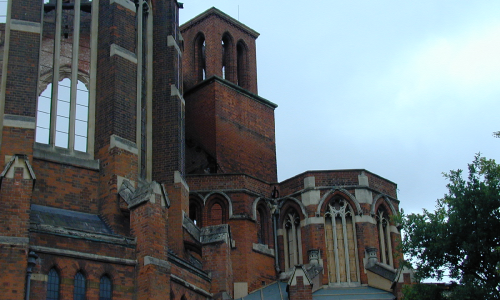