Commissioned by Alfred Rothschild to join the other Rothschild family residences in Buckinghamshire, Halton House was completed in 1883 and for 30 years provided the venue for Alfred’s sparkling weekend house parties which attracted the cream of British society, stars of the theatre and even Royalty. On Alfred’s death in 1918, the House was acquired by the fledgling Royal Air Force and, for the past 90 years, has served as the Officers’ Mess for Royal Air Force Halton.

Although the House no longer functions as a headquarters, it remains an officer' mess. Under the RAF the house has been conserved. To the chagrin of many people, the winter garden and its huge dome were demolished, and a new accommodation wing has been built in its place. However, with the appreciation of 19th-century architecture ascending, it is unlikely that such a travesty will occur again. A new dining room was built at the rear of the servants' wing of the house in the 1960s.

For the style of the house Alfred was probably influenced by that of newly completed Waddesdon Manor, the home of Baron Ferdinand de Rothschild, his brother-in law. While not so large there is a resemblance, but other continental influences appear to have crept in: classical pediments jut from mansard roofs, spires and gables jostle for attention, and the whole is surmounted by a cupola. The front of the house features a porte-cochère. A Rothschild cousin described it as: "looking like a giant wedding cake". If the outside was extravagant, the interior was no anti-climax. The central hall (not unlike the galleried two-storey hall at Mentmore Towers) was furnished as the "grand salon". Two further drawing rooms (the east and west) continued the luxurious theme. The dining and billiards rooms too were furnished with 18th-century panelling and boiseries. The theme continued up the grand, plaster panelled staircase to the bedrooms. The whole was furnished in what became known as "Le Style Rothschild", that is, 18th-century French furniture, boulle, ebony, and ormolu, complemented by Old Masters and fine porcelain.

The belvedere tower sits atop the north elevation of the Grade II*, 1880’s Rothschild’s mansion, and comprises a two storey structure made up of angle steel framing, boxed in timber and totally clad in lead. Water entry into the structure had seriously rotted sections of the wood, especially some of the brackets off which the cast lead moulded sections were fixed, the tower was to be dismantled, re-built off site and placed back into its original location.

Both English Heritage and the Local Authority required ‘record survey drawings’ to indicate the details of the existing appearance and construction. A measured survey was required to accurately record the structure and detailing at 3 stages of the project;

It was decided for this project that we would use a HDS laser scanner which would provide us with accurate 3d point clouds and also a visual record using the onboard camera. A rigorous control scheme was set-up on the roof but with an extra loop around the grounds in case any of the roof stations went missing.This worked extremely well as during each stage of the survey numerous roof stations were visible from the laser scanner setups providing a rigid control network.

1:20 scale plans, elevations and sections were drawn direct from the point cloud using Autocad 2014 at each stage along with a 3D TruView point cloud which was made available online and via DVD. 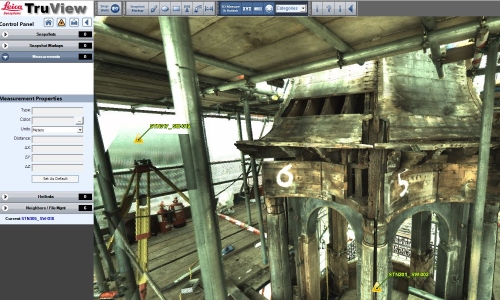 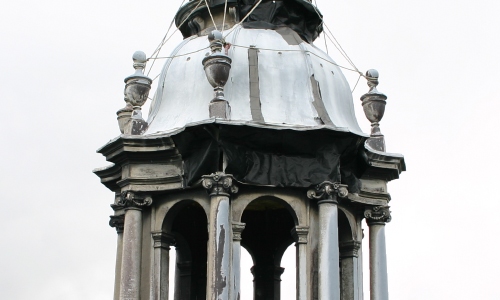