The Theatre Royal Haymarket is one of Britain’s most treasured theatres, known originally as ‘The Little Theatre in the Hay’, it is a Grade I listed building situated in the heart of the West End. The original building was designed and constructed by John Potter in 1720, but was rebuilt in 1821 by John Nash in it's current location. The theatre seats 893 patrons and is the third oldest London Playhouse still in use. Visit theTheatres website for more information.

We were working withPurcell Architects to provide a 3D Laser Scan survey of the fibrous plaster ceiling structure to support a comprehensive review and report of its condition. 2D drawings were to be produced from the 3D Laser Scan to further aid this report.

A control scheme was established both externally and internally to provide an accurate control network for the laser scanner. The Faro 3D laser Scanner was chosen for this particular project for its lightness and portability, we were working in some confined spaces so this was essential, also the Scanner could be used upside down on a specialist tripod which meant that the scanner could be lowered down into inaccessible areas from the floor above, see picture below.

Once the control scheme and scanning had been completed the data was then processed and registered using Scene software. Pointclouds were created for import into Autocad 2014 & 2015 and 2D drawings were produced of the ceiling voids at various levels to show the ceiling framework, trusses, beams and each individual vertical support tie. When the drawings were complete a final visit was made to site to field check the data and locate any ties which may have been missed from the scan data, fortunately this was minimal.

The images below show the ceiling void space and the Faro 3D Scanner being lowered down into a ceiling void. 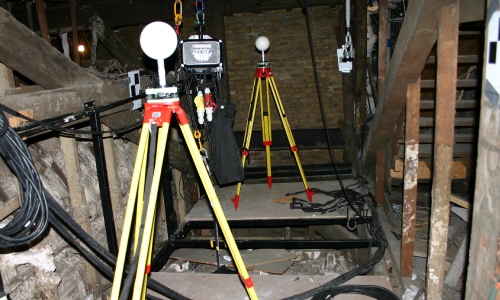 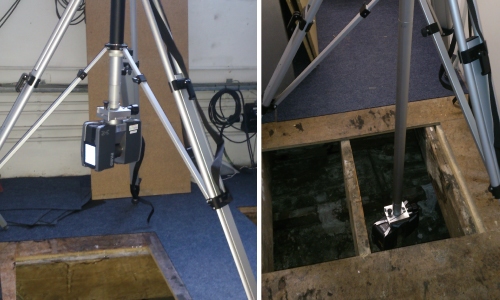 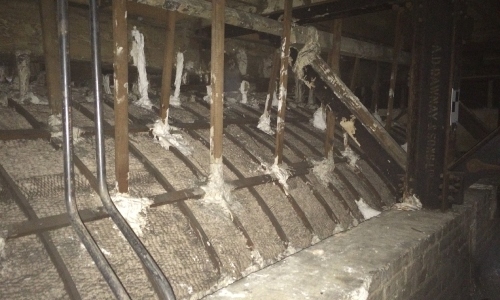 Next Case Study - Revit model of a Town House